There was a couple in my yoga class last night. At the end of the class, when the lights were dimmed and we were lying on the ground doing twists, I saw them (briefly) hold hands. 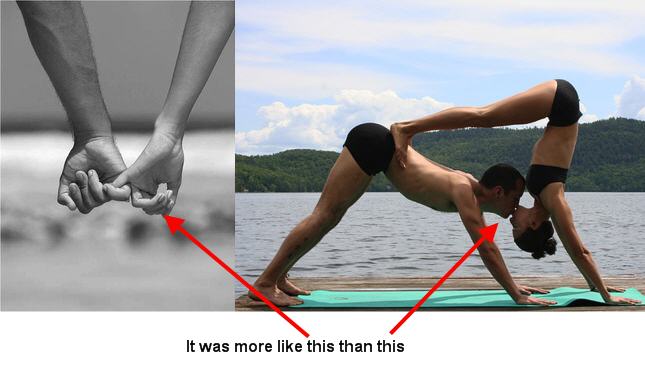 Like a sucker, I thought that was sweet. I never thought I’d be one for public displays of affection, but there I was, smiling like a dope, thinking about all the times I’d done something like that. Where I’d been so happy with M that I’d reach out and touch him quickly, just to make sure that he was real.

As mentioned, I had a mildly puritan upbringing. For me, actually saying “With this ring, I thee wed” seemed like an intimate act. I remember thinking: “What?! Kiss in front of people? After staring into each other’s eyes and vowing to be together? We might as well invite the world into our bedroom!”

It wasn’t actually that bad: we stayed fully clothed the entire time. M even wore a tie. And, cheesy as it sounds, I don’t think we noticed anyone else.

Which I guess is how the Public Displays of Affection start: the couple doesn’t notice anyone else. They only have eyes for each other, so they’re not aware if others are uncomfortable by their open-mouthed kissing, neck nuzzling, or “snuggle bear” nicknames. Sometimes, one member of the couple doesn’t even need to be there. My sister will talk to me for an hour about how in-love she is with her boyfriend: “I’m just so happy, you know? I never thought I could be this happy.”

Me? No thank you. I never talk about M that way, except very late at night, very quietly, when I’m more likely to forget myself.

This has actually caused some consternation. While it’s difficult for me to talk about how much I love my husband, I have few qualms discussing the psychological and emotional challenges of marriage and relationships. Early on in our relationship, I had to do a lot of personal growth. It was a tricky, confusing time: I complained constantly. I was very open about it: too open, for M.

Which, you know, is a fair point. Whoops. So I now try to be more balanced, or a little more private overall. It still feels a little like if I share my happiness, I’m tempting the fates, or being indecent. Like I’m sharing something so personal, I’ve become a flasher; or something so joyous, I’ve become a braggart.

But I understand the impulse: sometimes, in moments of bliss, it’s hard to contain yourself. It’s hard to not declare: “Ah! I love him!” or to be visibly passionate, like some hot-blooded character from the movies, or Justin Bieber.

So now I do smile when I see some private hand-holding, or through my huffing and eye-rolling when I see couples being demonstrative on social media. It’s kind of cute.

Marriage is softening me. 🙂