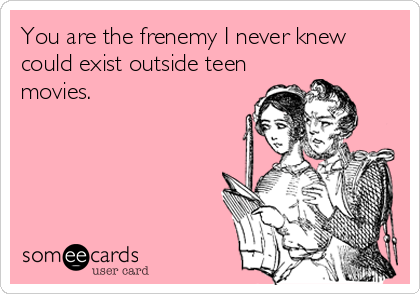 Years ago – more than 10 years ago – in university, I had a frenemy. True story. Let’s call her Amy.

We’d met our first week on campus, and we were from the same town and had some things in common. We got along. I thought she was cool, and that we had fun together. Sure, maybe she was a little kooky and insecure, but whatever. We were young – who wasn’t insecure?

She seemed to not make quite as many friends as I did. Next thing you know, she was friends with a bunch of my friends. We all hung out together. Fun times, fun times. We even travelled together. Then we drifted, but I knew she was homesick, and I was busy.

One of the things we had in common was a course of study. We were in a few of the same classes.

Towards the end of the year, before exams, people started studying. I’ve always studied better by myself, but I found out a group of my friends were going to prep together.

And that was the end of that.

Amy never told me why she didn’t want me in her study group. And I thought the whole thing was too weird to pursue. Not to brag, but in addition to being the most fun, I also had the highest grades in the class. Besides which, there had never been anything strange between us. If she was angry with me about something, she’d never shown it.

I guess she was just my frenemy. Go figure. We never spoke again.

I’m not perfect. I’ve made lots of mistakes. I’ve said awkward things at parties; I’ve been ignorant. Some people don’t actually think I’m that much fun, some people find me kind of obnoxious. Sometimes, I’m arrogant. Sometimes I make comments about the entire male gender that would be considered downright offensive (“They’re all idiots. All of them!” after another bad date). I’ve bought into stereotypes; I’ve gotten jealous; I’ve been angry. All of it.

Sometimes, when I run into people who I’ve acted poorly around, I am ashamed. Deeply, deeply ashamed. I suspect this is part of the human condition.

I mentioned Amy is from my hometown?

Fast forward 10 years, and both she and I are back. I thought I saw her on the street once, but shook my head – maybe not.

And then last night, I ran into her in the locker room at a local yoga studio. We made eye contact right when I walked in, and I nodded. It may have taken her a second to recognize me – she didn’t nod back.

All through the class, she avoided eye contact. Didn’t look up, didn’t look at me, kept her head down.

You know what it feels like, being on the other end of that shame? Being the person who is owed an apology and doesn’t have to cower?

I wish I could say I did nothing different, that I was a model of decency and grace. But I wasn’t.

Instead, I fluffed my hair up (with its fresh cut) so it looked something like this (which I never do): 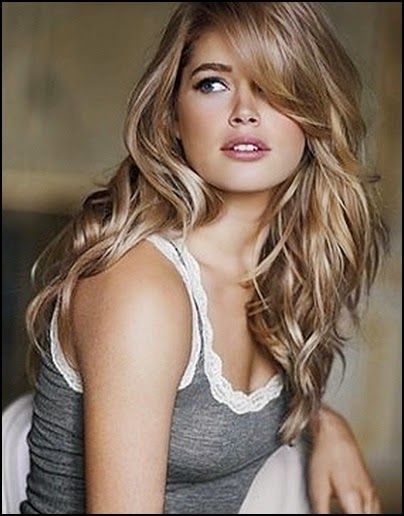 And I made sure to wave my wedding ring around as much as possible. Being married in and of itself is not an accomplishment – it’s really not (there are a million terrible marriages out there) – but she doesn’t have to know that. I knew she might be insecure about that – I smelled blood – so I went for it.

I even thought to myself: “Thank God I’m wearing such a cute outfit.” And then I thought: “Too bad Z isn’t picking me up.” Because, you know, when he’s not being a jerk, he is pretty gosh-darn attractive – the kind of handsome that makes me think: “Life really isn’t fair”.

So yeah, I went jungle. And it felt really good. In fact, I would have gone more jungle had I known she was going to be there – I was just using the tools I had at hand.

The calculating part of me thinks that’s why you should always be nice to people. Because when you’re mean, particularly to the tough ones, you will inevitably run into them and they will go out of their way to make you feel bad.

And then we’ll call our closest friends and cackle about it. Maybe even blog about it.