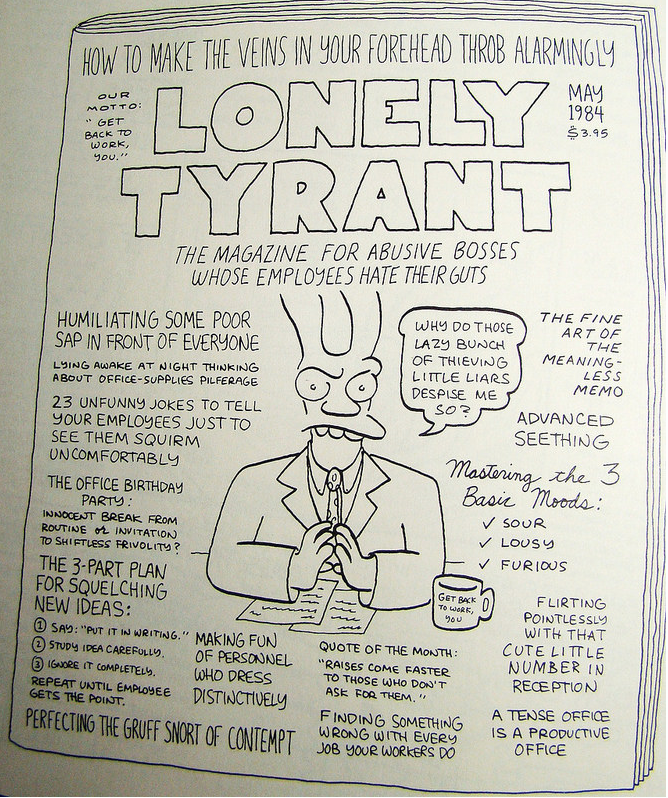 One of my favourite college professors was a huge Life in Hell fan. I liked the prof so much that I bought a copy of the Love in Hell collection, thinking I might appreciate the humour. Little did I know that my boss was also a pre-Simpsons Matt Groening fan, and when he mentioned The Lonely Tyrant earlier this week I discovered a side of Life in Hell that was much more up my alley.

The love jokes? Meh. The work jokes? I cannot get enough! “A tense office is a productive office.”

Not all 1,000 residents are alcoholics; not everyone is depressed; and nobody has committed suicide, at least not recently.

Moreover, she said, her arctic domain is “pure paradise” if you like wild berries, fresh fish and, of course, vast quantities of snow.

As the article states: “Nobody likes his or her home being portrayed as a sinkhole of misery.”

Several years ago, I saw a documentary, “When Borat Came to Town“, about a town’s response to the filming of Borat. Basically, the town had agreed to be filmed for the Borat movie,  not realizing that they were going to be the butt of Borat’s backwards-small-town jokes. If I recall correctly, the woman who was shown as Borat’s sister (and the town prostitute) was particularly offended.

Be careful, movie-makers, when you make fun of small towns!

18-year-old Chelsea Lane, turning to prostitution because she wants to feel beautiful, because she’s self-conscious about being chubby: this is sad. The justifying the two clients who “made her feel dirty” with: “I can think of personal partners who treated me like that.” is also sad.

Frankly, I don’t believe it’s the world’s oldest profession – the world’s oldest profession is probably bartering, which we now call “sales”. I believe prostitution is something we’ve created because women have been undervalued over the ages. I believe they’ve been undervalued because childbearing makes them more biologically vulnerable. I am thankful for contraception, so women do not have to bear children that they do not want or are not ready for. I hope that with time and technology, we’ll be able to correct these wrongs –  where we systemically undervalue women, or reduce their function to those of their bodies.

Sadly, poor women (like Skylar) will see any changes last.

Ultimately, I don’t want people to use each other like that – so obviously and cravenly, and with so little romance or humanity. I don’t want anyone to trade a couple of crumpled up $20 bills to share an intimate moment with another person, nor do I want someone to be in a position where they want to accept $40 to let someone have at them, because they’re so hungry for sexual admiration or are actually physically hungry.

I understand that prostitution takes on many, many forms – and also that there are male prostitutes too – that it’s not simply a women’s issue – but it seems to me that “empowered hooker” is both an oxymoron and a myth (much like “political science”). It seems that prostitution, as an industry, takes advantage of our most vulnerable  – poor, insecure women – and puts a cash value on their parts. It is shameful.

*TBH, I’d had a string of bad choices. I swear, the reviews for Inside Llewyn Davis were good! I had no idea it was going to be so tedious!