Most of my clothing is highly practical. Flat shoes, sturdy trousers. Some of it is less so – silk blouses or shifts I try to keep brilliantly white. Only a couple of items are in my closet because I love them: I saw them and I thought: “That is so pretty!” and now wait, sometimes for more than a year, for an appropriate time to wear them. In the past, I’ve even created events so I could wear them: “Sweetheart, we’re going out!”

Because, let’s face it: it’s no fun to be practical all the time. Maybe this is why, twice a year, I review images from very fancy parties that I did not attend: I love Oscar night, and I love the Met Gala night, which fundraises for the Costume Institute there.

I (obviously) like the Met Gala pictures better, because the clothes are better.

There are levels of getting dressed. First you do it for function and comfort – warm sweaters on cold days, or light cotton to shield from sunburns. Then you do it for social reasons – to be appropriate at an event, or to signify to those around you that you’re capable- for reputation.

Sometimes, you do it for expression – to express how you’re feeling or what you are like. And sometimes (rarely) you do it to express an idea, or to make a statement. 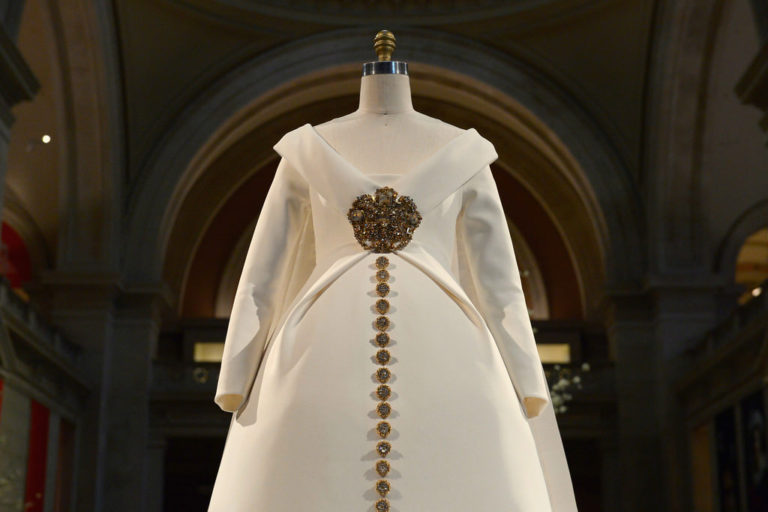 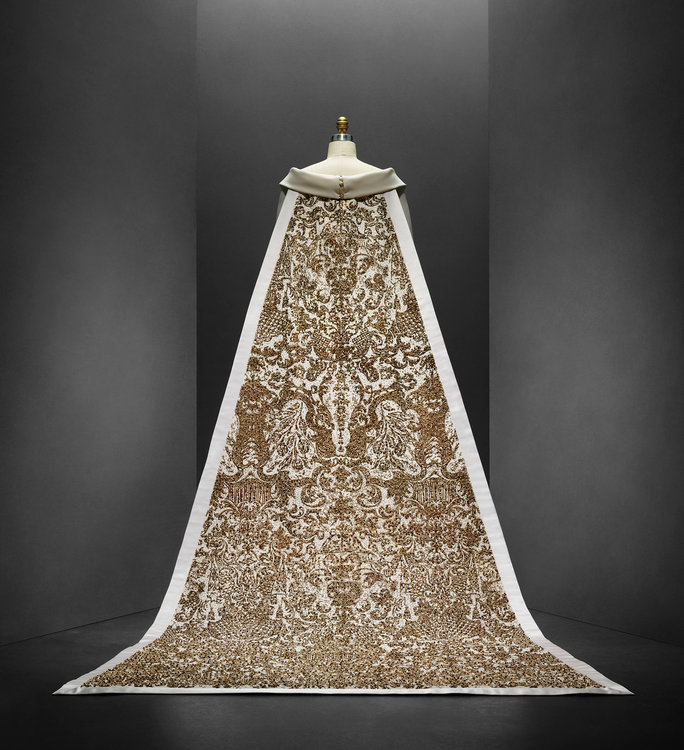 I read that it took about 933 hours to make. Look at how creamy it is, how luxurious! The embroidery is so beautiful, it’s painful.

That is haute couture. The dress itself was first worn on a pregnant model, too: this piece was not made to be mass-produced. And, looking at it, it’s not for everyday wear: it’s for something special. Those baroque references, and the shape itself, like something from the 15th century – it’s like a dress from a tapestry, and the train itself is a tapestry.

For those of you who didn’t grow up with someone who poured over the pages of Vogue, “ready-to-wear” clothing is made to be sold “off the rack”. It’s not made for an individual customer. Couture clothing is designed and built only for the wearer – haute couture is an extension of that – and it’s supposedly made by hand. Thus the Manus x Machina theme, studying their intersection – because most clothing, even haute couture, is made with some machine involvement, however minimal.

I own nothing that has been designed and made just for me. I (almost – don’t worry 🙂 ) cannot imagine – clothing not just made for you, but also designed for you – lines altered with your body in mind.

Imagine standing in your underwear in an atelier, surrounded by bitchy Parisians. To quote Cathy Horyn, the fashion critic: “Haute couture is not for the faint of heart any more than it is for the cheap of purse.” (so, I’m excluded) and then: “As it is, there are not more than a thousand women in the world who have what it takes to play this game on a regular basis.”

She wrote that in 2000. I’ve read more recent estimates pegging it at about 2,000 – 4,000, but you get the gist: few. And, many of them are thin: not only so they can fit into the sample sizes (who wants to spend extra time embroidering a sample garment any larger than it needs to be?), but also because they want the clothes to hang a certain way. These customers – they will stay the same size for decades, so they can keep wearing their 1968 Valentino. The stakes are high. “If Valentino spent 500 hours on this” they’ll think, “the least I can do is keep wearing it.”

Haute couture is couture made by the best couturiers: there are some French legal definitions around the term (of course – like Champagne), but really, the phrase just conveys how much work goes into the individual pieces.

That’s right: behind every Chanel, every Christian Dior, is a team of people who are such good sewers, they’ve elevated it into an art. Even Karl Lagerfeld admires the work that goes into the beading for his designs:

The embroidery – he called it “embroidery of light” – glistened like spiders’ webs in the morning dew. Small, rounded sleeves caressed the shoulders; seams were detailed with shimmering beads and metallic threads.

Seen up close, the workmanship is astounding. Lagerfeld himself is still marveling, when we meet backstage before today’s show.

“How do they have enough patience to do it?” he wonders about the hand-work of the ‘petit-mains’ who have laboured over these exquisite examples of the couture art and craft. “Some of these tops have 400,000 pearls and crystals. Can you imagine? I couldn’t do it for five minutes.”

True haute couture inspires. Not just respect for the workmanship, but also for the specific piece’s expression and references. Like reading a novel or watching a film- there’s the craft, the inspiration for the work, and then the statement that the piece itself is making.

And, like any field, the more you know, the more you are rewarded. At the Met Costume institute, there are some people who love fashion – hey know the collections, they study the work, they catch the references. Glamour be damned – some of these people are genuine clothing nerds. That’s partially why I love the photos so much – you can tell who did their homework, and who just phoned it in.

Besides, apart from there being very few who buy or wear haute couture, there are even fewer occasions where it can be worn.

Most of the clothes end up in collections – in museum or private storage. It’s a treat to see them trotted out.

Most couturiers actually lose money on their haute couture lines. Chanel, for example, makes haute couture, but also does ready-to-wear, and then items like shoes and lipsticks. The haute couture raises awareness and prestige – the sort of prestige that makes women like me shell out $30-40 for a lipstick. That’s the real money maker.

Though, I suppose, it could be argued the other way: some designers do all of that – the ready-to-wear, the lipstick – so that they can afford to make haute couture. To quote Horyn again: it is “an institution both degenerate and profound.”

What statement are you making when you wear haute couture? When you wear a dress that took 500 hours to make? You are lavish, expensive, frivolous, possibly insane: but you also love the arts, and appreciate the work it takes to create something so beautiful. (Unless, of course, you don’t appreciate the work, and are just wearing it because you like feeling exclusive. Then, you’re just showing off.)

The biggest costume show in the world is the one at the Met. It opened this week, and the gala benefit to raise funds for it was on Monday night – The First Monday in May. This is also the name of a documentary in theatres right now.

The film follows preparations for last year’s exhibit and gala. The Gala is to support the exhibit – the exhibit relies on it to be funded – but, the party itself is far less interesting (at least, it is if you’re a fashion nerd). People fretting over seating arrangements and table settings, ugh –  but redeemed because their efforts are in service of an art form.

Watching it, I thought about how social fashion is – how social all art is, actually – but specifically fashion. It’s more intimate – instead of just watching a dance or looking at a piece, you wear the art on your body. As a wearer, you literally are taking another’s expression and making it your own – your world sees you in that gown, you making that statement. It would require tremendous ego, but also trust. As a designer, how much you must love the body – how social you’d need to be to choose another’s body as your medium! To want someone else to wear your work!

The exhibit itself, as shown in the film, was gorgeous: at one point, troubled designer John Galliano looks at a piece of his work and exclaims: “You’re not allowed to do stitches like that anymore – you’ll go blind!”

Look at this dress, by Guo Pei:

There was some fashion nerding, of course. One designer sighs after discovering he’d wrongly assumed Guo Pei’s blue porcelain dress was a Galliano for Dior.

If you love fashion, it’s a must-see: you’ll feel like you’re getting to watch your people.