I complained to my dad about something the other week, and he snapped at me: “to whom much is given, much is expected.”

He was telling me, basically, to shove it. He reminded me, in so few words, that I can spend my life complaining that I haven’t been given more, or I can actually buckle down and contribute something.

This is a reminder I need: I complain about everything, which is ridiculous, because I have a nice life.

I was momentarily stunned: he was right.

The phrase “to whom much is given, much is expected” is a variation on a phrase in the book of Luke, from the parable of the faithful servant. It’s not the first time my dad has used a biblical quote to scold me, nor is it the first time I’ve been inspired by the Good Book.

So it was my dad I called on Sunday after a Saturday evening discussion. In the evening, during a conversation, a friend of ours had mentioned something about religion being bad news.

Me: “Wait – do you mean all religion? Are you distinguishing between organized religion and general spirituality?”

Friend: “Yeah, all of it. I have problems with all of it. Especially organized religion.”

I asked a few more questions, I learned he was an atheist, we bantered a bit, and moved on. I didn’t say anything about my own beliefs, not even when he said that he thought all religious people were stupid.

This wasn’t the first time I’ve met an atheist who’s made derisive comments about religion or spirituality. It’s also far from the first time I’ve heard someone say something derisive about a specific set of beliefs. Some of the nastiest discourse is between churches – between those of different faiths. 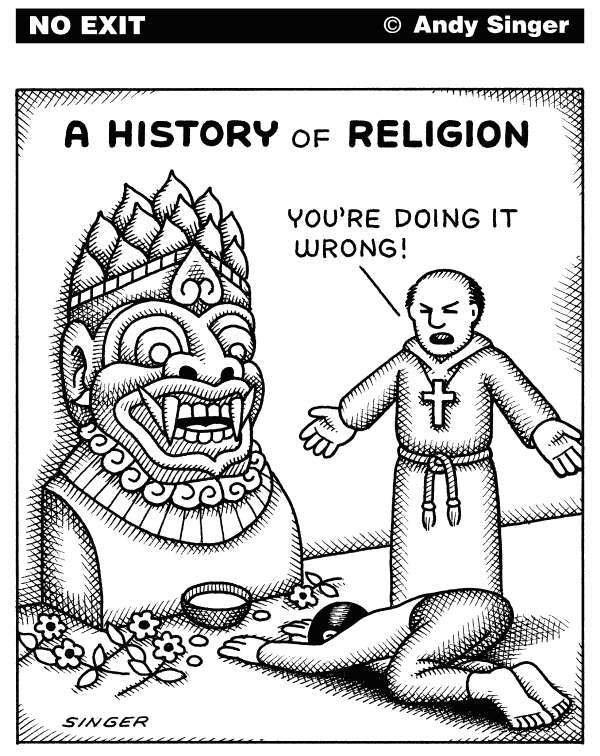 To a certain extent, I understand the objections. Institutional behaviours can be oppressive, and when the institution is one that purports to be above others – where its sole purpose is to provide moral guidance – those oppressions have a particular kind of abusive betrayal.

I often wonder, where is the line between helping the fallen and exploiting the weak?

If religion aims to elevate even the most lowly, base parts of us – if it aims to lift us and make us more beautiful – and yet it needs resources to do so – what is reasonable to expect of a congregation? At what point are religious leaders simply profiteering off their members for their own misguided reasons?

I asked my dad: “What do you do, when you meet people who think that because you’re religious, you’re stupid?”

My dad: “It doesn’t bother me. Either you have faith, or you don’t. When you’ve really thought it through and become comfortable with your beliefs, you’re comfortable to let other people have theirs.”

Sunday’s sermon was about the wedding at Cana, where Jesus turned water into wine. I haven’t been to church in ages; I go rarely. As an adult, I question the stories much more. Did Jesus actually turn water into wine?

Or (cough cough): Was there actually a virgin birth?

And then I wonder if it matters. Do these things need to have actually happened for me to find peace and guidance once-a-week?

Lying in bed after, I talked to Z about it. The things I questioned; the guidance I take from certain lessons (like the parable of the faithful servant), the things I like.

Z is an atheist. This has its perks: my questions and stories are much more interesting.

We talked a little about heaven and hell and I realized, suddenly:

Me: “The joy you have in your life with me is all the joy you get to have for all eternity?”