Last night, I realized I’d been pushing myself a little too much.

Z and I have a few irons in the fire, and I keep trying to toss in more. I’d even sent my brother-in-law a meme to describe our* approach to personal finance earlier in the day. It doesn’t just apply to our personal finances, but also my approach to life in general: 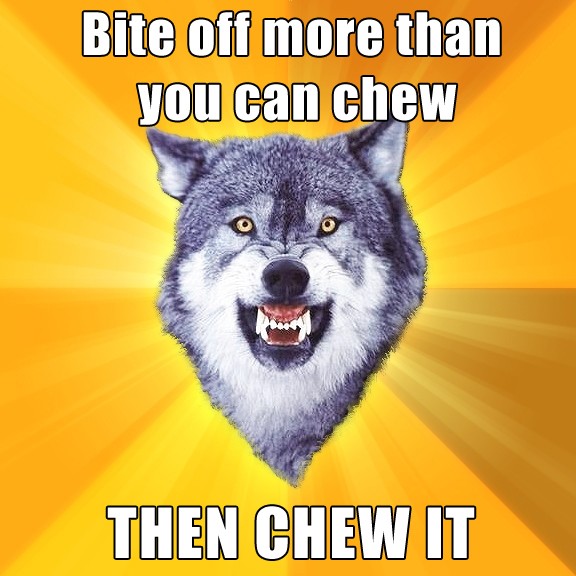 The other night, I told Z I thought I should stop drinking wine. I called a friend and told her I thought I should start lifting weights, and would she be interested in seeing a trainer with me? I went grocery shopping at a discount grocery store and bought only diet foods. I was antsy because I missed a yoga class, and I felt guilty because though we’d taken the dog out, did he look like he could use a little more exercise? Had the cat been cuddled enough? Was I ovulating properly? Shouldn’t I be reading instead of just mindlessly surfing the internet? (Even though I’d finished a book last night. But I’d felt guilty about that because it was overdue at the library.) Why had I still not finished that French braid tutorial?!

I made my diet pasta alternative and felt overwhelmed the whole time.

Z: “Maybe you should slow down?”

When I think about everything I want to do and accomplish, I’m overwhelmed. This is why it’s so important to prioritize, and to discard all the things that are lower on the list. Rome wasn’t built in a day.

Maybe, instead of adding another iron to the fire, I should take a few out. Lift weights, but not berate myself for eating a carb. Stick to our budget and not be so hard on myself for not cutting back more. Read books when I feel like it, but only if I like them. It’s okay to slow down.

Z poured me a glass of wine. It was delicious.