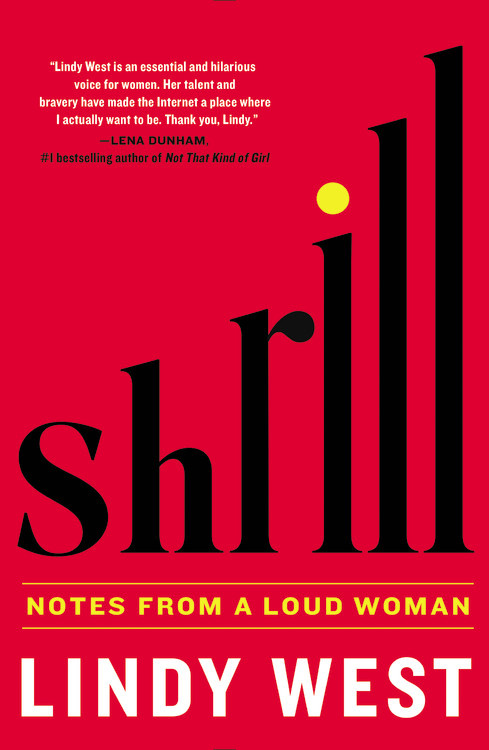 I hadn’t heard of Lindy West before I saw reviews for her book, Shrill, starting to pop up. I’ve read a few popular funny feminist books/memoirs (ahem, ahem), so I didn’t jump on this one. In fact, it took months and months for me to pick it up, but I’m glad I did.

Despite having a blog, and avidly reading blogs, I don’t always like the blogger-style of writing in books. What seems conversational on the internet can seem too informal on the page. Parts of Shrill are like that, too me – too chatty, not structured enough.

There were parts I wasn’t interested in at all, like her thoughts on menstruation or abortion – not because they’re not interesting, it’s just not my bag. Nor do I particularly care about American comedians, like Jim Norton or Patton Oswalt, though you may. Her stories about these comedians were only interesting to me in that they prompted her thoughts on rape and sexual assault.

The strength of the book, to me, is West’s thoughts on weight, body image, and sexual assault. The Washington Post describes Shrill as “an eloquent chronicle of the costs of activism”. Shrill details West’s thoughts on key issues as much as how she came to voice those thoughts; it is a memoir of a reluctant activist.

She is entertaining. For example, while describing how she came to be body-positive (she describes herself as “fat”), she writes:

“A music festival is a kind of collective hangover in which people who are cooler than you compete to win a special kind of lanyard so they can get into a special tent with unlimited free Gardetto’s. The only food available to the non-lanyarded hoi polloi is expensive garbage dispensed resentfully from a shack, which is how I found myself, in 2010, sitting alone at a picnic table in the press area of the Sasquatch! Music Festival, sweatily consuming a $45 Domino’s pepperoni personal pan pizza and a Diet Pepsi and hoping no one would notice me.”

On body-image, she is thoughtful and measured: she is less: “obese women are beautiful too” and more: “treat everyone with respect and dignity, regardless of what they look like”. (Amen.) On rape jokes, she refuses to be dismissed as simply “not getting the joke” by highlighting how common sexual assault is. I didn’t know this, and was shocked and saddened to read it, but as West quotes “one study says that over 50% of young black women are sexually assaulted”.

I checked after, hoping she’d exaggerated – 50%! How awful! – but she didn’t. Some studies estimate it’s as high as 60%. Yes, there should be freedom of speech, but there should also be awareness that the prevalence of rape jokes amongst comedians (who are mostly male) de-stigmatizes a very violent and too common act.

Well worth a read.