Earlier tonight, while out with Z, I ran in to a woman I don’t like… and I’m pretty sure it’s mutual. It’s a little bit dramatic of me to refer to her as an “enemy” – she’s a nice woman and an honest person – but there’s always something off-putting about running into someone when you know they don’t like you, and you don’t like them either.

I (of course) did what any sensible person would do: I avoided eye contact. I didn’t rush home, and if we’d caught eyes, I could have faked it. I did whisper to Z: “Fuck. Let’s not linger.”

A few weeks ago, I saw a piece in Vox about an old (1936!) manual: Live Alone and Like It, but Marjorie Hillis. Over the years, this soundly sensible advice has inspired a few pieces on the internet – from blog posts to one in Mental Floss. Mostly because, in addition to being sensible, it is also both bitchy and fabulous.

Hillis’ counsel aims to help readers “have an elegant time”.  She advises those who live alone to have hobbies, and puts it like: “Be a Communist, a stamp collector, or a Ladies’ Aid worker if you must, but for heaven’s sake, be something.” So, it’s written authoritatively and directly, but also sounds like an etiquette book. 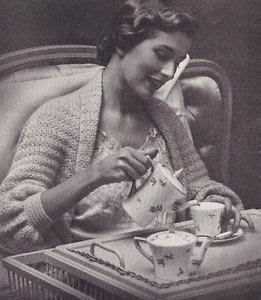 My favourite bit was in the Vox piece, when the writer talks about enemies and maintaining a spirit of defiance – Hillis advised that a spirit of defiance and independence are rewarding, and that if practiced correctly, can even make you feel benign towards your enemies. Hillis seems to take for granted that an adult woman living alone will have both friends and enemies.

As the Vox writer says: “You are glamorous enough to have enemies, aren’t you?”

Until I’d read it, I hadn’t associated having enemies with being glamorous.

But running into a pseudo-enemy tonight, it did make me feel a little glamorous.

Maybe it’s time for me to run out and take another piece of her advice.

Honestly, my nightclothes are probably 20 years old, and very washed out. Maybe it’s time for a little more glamour in my life. 😉